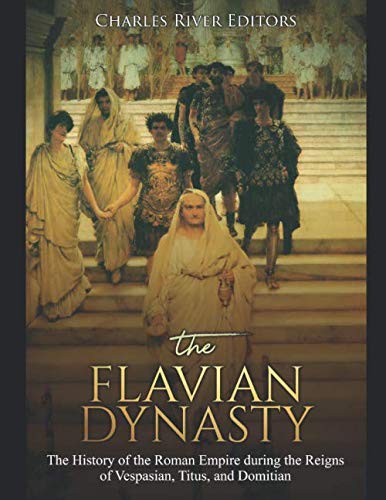 $9.99
plus shipping
View on Amazon

*Includes pictures
*Includes ancient accounts
*Includes a bibliography for further reading
The 12 months known in history as the Year of the Four Emperors was a pivotal chapter in the long epoch of the Roman Empire. It marked the tumultuous end of the Julio-Claudian Dynasty and the advent of a year of civil war, renewal and realignment, the result of which was the establishment of a new era and the founding of a new (and arguably more rational and responsible) imperial dynasty.
The controversial year began with the decline of the Julio-Claudian dynasty under the rule of Emperor Nero, the last ruler of a dynasty founded by Julius Caesar, who was perhaps the most famous Roman emperor that never was. The Julio-Claudian succession included such names as Augustus, Tiberius, Caligula, Claudius, and of course Nero, names that resonate with great power throughout the chronicles of Roman history, in many cases thanks to the violence, madness, misrule and decadence that seemed to take root at the center of imperial Rome at the dawn of the common era.
Having left no heir, Nero’s death plunged the empire into confusion and chaos, bringing to an end the Julio-Claudian lineage while at the same time offering no clear rule of succession. This presented the opportunity for influential individuals in the empire, and in particular provincial governors who also commanded large military garrisons, to express and further their own ambitions to power. The result was a period of instability and civil war as several pretenders to the throne, among them the emperors Galba, Otho and Vitellius, gained and lost power, until finally the emperor Vespasian seized and retained the imperial principate. Vespasian imposed order and discipline on a chaotic empire and founded the Flavian Dynasty, which survived until 96, encompassing the reigns of Vespasian and his two sons, Titus (79–81) and Domitian (81–96).
Vespasian’s reign began in brutality on December 20, 69, when his troops captured Vitellius as he was trying to flee Rome. The troops dragged him to the Forum, where he was tortured before being murdered and thrown into the Tiber. The Flavian Dynasty also ended in brutality, with Domitian being hacked to death by his own secretarial staff in 96. In between, however, Vespasian, Titus, and even the reviled Domitian were responsible for many innovations that served the empire well in the years that followed, and they prepared the way for empire’s zenith from 96-192. The Flavian emperors were very different in temperament from each other, but all three contributed in their own ways to the consolidation and expansion of the imperial system individually. All three men, to a greater or lesser extent, added to the imperial city, and the Flavian Amphitheater, known in modern times as the Colosseum, remains one of the most iconic and enduring physical reminders of the glory of Rome.
The Flavian Dynasty: The History of the Roman Empire during the Reigns of Vespasian, Titus, and Domitian examines the end of the Julio-Claudians and the rise of the Flavians. Along with pictures depicting important people, places, and events, you will learn about the Flavian Dynasty like never before.

$9.99
plus shipping
View on Amazon