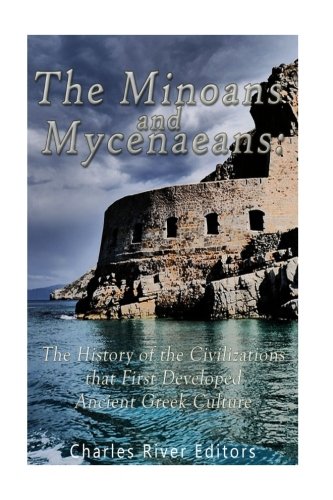 $7.99
plus shipping
View on Amazon

*Includes pictures *Examines the archaeology, history, and culture of both groups *Includes online resources and a bibliography for further reading Nearly 2,500 years after the Golden Age of Athens, people across the world today continue to be fascinated by the Ancient Greeks. But who did the Ancient Greeks look up to? The answer to that question can be found in Homer’s The Odyssey, in which Odysseus makes note of “a great town there, Cnossus, where Minos reigned.” It was perhaps the earliest reference to the Minoan civilization, a mysterious ancient civilization that historians and archaeologists still puzzle over, but a civilization that renowned historian Will Durant described as "the first link in the European chain.” Nearly 2,000 years before Homer wrote his epic poems, the Minoan civilization was centered on the island of Crete, a location that required the Minoans to be a regional sea power. And indeed they were, stretching across the Aegean Sea from about 2700-1500 BCE with trade routes extending all the way to Egypt. The Minoans may have been the first link in the “European chain”, leading to the Ancient Greeks and beyond, but questions persist over the origins of the civilization, the end of the civilization, and substantial parts of their history inbetween, including their religion and buildings. In the wake of the Minoans, a Greek culture flourished and spread its tentacles throughout the western Mediterranean region via trade and warfare. Scholars have termed this pre-Classical Greek culture the Mycenaean culture, which existed from about 2000-1200 BCE, when Greece, along with much of the eastern Mediterranean, was thrust into a centuries long dark age. However, before the Mycenaean culture collapsed, it was a vital part of the late Bronze Age Mediterranean system and stood on equal footing with some of the great powers of the region, such as the Egyptians and Hittites. Despite being ethnic Greeks and speaking a language that was the direct predecessor of classical Greek, the Mycenaeans had more in common with their neighbors from the island of Crete, who are known today as the Minoans. Due to their cultural affinities with the Minoans and the fact that they conquered Crete yet still carried on many Minoan traditions, the Mycenaeans are viewed by some scholars as the later torchbearers of a greater Aegean civilization, much the way the Romans carried on Hellenic civilization after the Greeks. Given that the Mycenaeans played such a vital role on the history in the late Bronze Age, it would be natural to assume there are countless studies and accurate chronologies on the subject, but the opposite is true. Although the Mycenaeans were literate, the corpus of written texts from the period is minimal, so modern scholars are left to use a variety of methods in order to reconstruct a proper history of Mycenaean culture. In fact, even the name “Mycenaean” can be a bit misleading since it refers only to one locale in Greece. However, since the city was the first Bronze Age site discovered, it became a reference point for archeologists and historians to use to refer to any Bronze Age discoveries in Greece. Archeology provides the base for any study of the ancient Mycenaeans; since many of their cities were replaced and built over in classical, medieval, and modern times, excavations of the Bronze Age cities can tell modern scholars how these people lived and died. Closely related to archaeology is art history, which can be the study of any material culture including pottery, sculptures, reliefs, and jewelry. The Homeric epics also provide some information about Mycenaean culture, though Homer was a poet who lived hundreds of years after the collapse of the Mycenaean culture. Classical Greek historians and geographers also wrote about the Mycenaeans, but their works should be consulted with caution as some of their statements have proved false."_"

$7.99
plus shipping
View on Amazon