The Circus Maximus and the Colosseum (Book published February 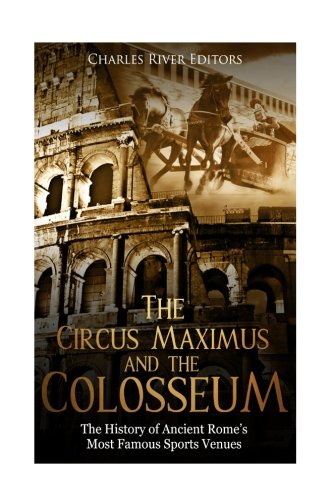 *Includes pictures
*Includes ancient accounts
*Includes online resources and a bibliography for further reading
The ambitious and fearless emperors that built the legendary Roman Empire from scratch, the broad-shouldered and bronzed gladiators with their iconic plume helmets and glinting swords, and elaborate parties attended by toga-wearing Romans fueled by alcohol, violence, orgies, and other godless acts all paint a picture of Roman life.
At the Circus Maximus, the guttural cheers of the spectators reverberated across the enormous open space, but their cries could hardly be heard over the rumble of the ground. On the ellipse-shaped track, 5 charioteers would skew their bodies and steer their magnificent vehicles around the curves. Gusts of sand and dirt flew up from the whizzing wheels and encircled the pounding hooves of the stunning stallions. Distracted personnel and guards dragging their feet were considered fair game. As one chariot careened to the side, preparing to collide with another chariot, a row of guards might have to try to duck out of the way in the nick of time. Some would be trampled by hooves. Chariot races were dangerous for participants too. A charioteer could become disoriented and fail to position himself as his horses moved instinctively, sending his body catapulting forward out of the chariot. Needless to say, chariot racing in Rome was a nail-biting spectacle.
When the Colosseum was built in the late 1st century A.D., the Romans, a people known for their architectural acumen, managed to amaze themselves. Martial, a Roman poet writing during the inauguration of the Colosseum, clearly believed the Colosseum was so grand a monument that it was even greater than the other Wonders of the Ancient World, which had been written about and visited endlessly by the Romans and Greeks in antiquity. Indeed, although the Wonders were wondrous to behold, the Colosseum was a spectacular achievement in architecture, something new and innovative, and therefore an amazing “Wonder” in its own way.
The Colosseum was designed to be both a symbol and show of strength by the famous Flavian emperors, most notably Vespasian and his sons Titus and Domitian. Vespasian had started the construction of the Colosseum shortly after becoming emperor in 69 A.D., but he died before he could present any spectacles in his giant amphitheatre. That honor went to his son Titus, who celebrated the inaugural opening in 80 A.D. with 100 days of games, despite the fact that the Colosseum was not completely finished. When his brother Domitian came to power in 81 A.D., he finished the amphitheatre, but not without making some changes to the overall design. By the time it was truly finished, the Colosseum stood about 150 feet tall, with the oval in the center stretching nearly two football fields long and over 500 feet across. The Colosseum is a large stadium even by today’s standards, and its great size conveys the power of the empire as it dominates the landscape and towers over nearby buildings.
Nearly 2,000 years later, the Colosseum still amazes millions of people who come to visit it, and when asked to visualize a monument that represents the Roman Empire, many conjure up an image of the large amphitheater. As Keith Hopkins and Mary Beard put it, the Colosseum is “the most famous, and instantly recognizable, monument to have survived from the classical world.” At the same time, the Colosseum also represents the Roman games and spectacles, particularly the gladiatorial combats that so many people today find both abhorrent yet fascinating. Given its massive size and the architectural ingenuity involved, the Colosseum played host to all sorts of games, including massive hunts of exotic animals and even sea battles.