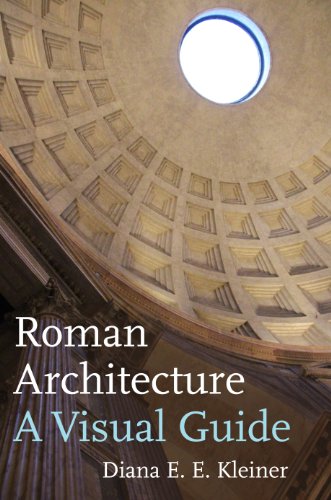 Diana E. E. Kleiner has shared her deep knowledge and passion for the history and architecture of ancient Rome with thousands of students, travelers, and enthusiasts through her lectures. She is indeed “the traveler’s best friend”—and now she has created an enhanced eBook that richly deserves that encomium as well. Professor Kleiner personally guides you through the great ruins of Rome and the Roman Empire, highlighting their most fascinating and important features with an extraordinary wealth of knowledge, insights and anecdotes. Roman Architecture: A Visual Guide offers readers over 250 appealing and enlightening visual images alongside accessible, concise descriptions that focus on precisely the most pertinent and meaningful information.. Roman Architecture: A Visual Guide is an indispensable—and enchanting—resource for travelers, architecture enthusiasts, historians, and all those with an interest in any aspect of the richly multi-faceted subject that is Roman architecture.

At its most expansive, the Roman Empire stretched from the British Isles to Egypt; Rome was the ancient world’s greatest superpower. Roman Architecture: A Visual Guide takes us to the great buildings and engineering marvels of Rome and its empire, exploring not only Rome but also buildings preserved at Pompeii, Herculaneum, Ostia, Tivoli, North Italy, Sicily, France, Spain, Germany, Greece, Turkey, Croatia, Jordan, Lebanon, and North Africa—allowing readers to trace the growth and expansion of the Roman Empire chronologically through its cities.

Roman Architecture’s wealth of photographs and site plans of these intriguing structures are presented from the fresh perspective of an author who has journeyed to nearly all of the sites, revealing most of them through her own digital images. In addition, this interactive e-book makes learning about these monuments easier than ever, with handy maps and geolocation links that show you just where the monuments are and, if you’re traveling, how to get there. A fascinating introduction to some of history’s most compelling and influential architecture, Roman Architecture: A Visual Guide is an enthralling resource, whether one wishes to visit Rome in person or from afar.

DIANA E. E. KLEINER is the Dunham Professor of History of Art and Classics at Yale University. A pioneer in online education, she is the Founding Director of Open Yale Courses, where she offers Roman Architecture as a free self-directed course. Kleiner has resided in Rome and Athens and has traveled extensively throughout what was once the Roman Empire, experiencing firsthand nearly every site and building featured in Roman Architecture: A Visual Guide.