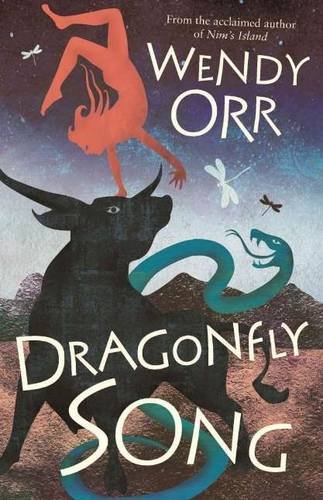 Dragonfly Song is a story of a mute young girl named Aissa but known to the people as No-Name or cursed child. She encounters many misfortunes in her life until she becomes one of the bull dancers for the Bull King on a far-off island. This story is set in the Bronze Age Aegean and is written for high school students. Its mixture of archaeological evidence and interpretation of Minoan rituals by Wendy Orr makes it a unique story but still relevant to modern readers!

Aissa, the first daughter of the Lady and the Chief, was born with a small extra thumb on each hand, and because she was not perfect, she was to be thrown off the cliff. Instead, the wise woman Kelya gave Aissa to another family who raised her as their own until raiders visited and took those Aissa loved. Aissa was found hidden in a bush and stayed silent for the next eight years, just as her mama told her.

She lived as No-Name and was treated as the lowest of the low. Even when she was banished from servent duty, she was spit on and called the cursed child - until she learns her name. When she turns 12, she knows her only chance to be free is to become a bull dancer on the faraway island of the Bull King. There, she learns who she is, what she can achieve, and the strength she has always had within.

The novel is broken down into two books; book one chronicles the hardships of Aissa's life. She is bullied, spit on, banished to fend for herself, and verbally and physically abused. She lives in a hidden rock cave before finding a place with the wise women of the palace. Book two details Aissa becoming one of two bull dancers (along with a young boy named Luki), to be sent to the Bull Kings island; none of the previous bull dancers had ever returned.

Dragonfly Song is set in the Aegean Bronze Age but transcends time with themes of identity, belonging, bullying, & self-acceptance.

Readers familiar with Crete, Knossos, and the Minoan civilization will enjoy the intertwining of archaeological evidence from Minoan centres and Wendy Orr's interpretation of the ritual evidence left to us at these sites. Dragonfly Song is set in the Aegean Bronze Age but transcends time with themes of identity, belonging, bullying, and self-acceptance. Told from the perspective of a young girl who has to face so many misfortunes and truly terrible experiences, Dragonfly Song tells a story of overcoming hardships even when you think you are not strong enough. Wendy Orr seamlessly weaves prose and verse for an engaging reading experience - a unique one from the perspective of a girl who does not speak.

This book would be perfect for use in high school with its incorporation of archaeological evidence and important themes often discussed in English class. The different forms of writing present a unique opportunity to analyse why the author chose to use verse and prose, and the function of each within the narrative. I would recommend this to students and lovers of the Bronze Age Aegean!

$13.65
plus shipping
By purchasing books through this website, you support our non-profit organization. Ancient History Encyclopedia receives a small commission for each book sold through our affiliate partners.

In this interview, Ancient History Encyclopedia is talking to Wendy...

$13.65
plus shipping
By purchasing books through this website, you support our non-profit organization. Ancient History Encyclopedia receives a small commission for each book sold through our affiliate partners.
Remove Ads